Jiu Jitsu is generally divided between two categories, Gi and No-Gi. The Gi is a traditional martial arts uniform that consists of a cotton jacket, pants, and belt. The gi is used in several martial arts including Karate, Taekwondo, and Judo although it has different names in different sports. The gi is part of the historical martial arts tradition and is also preferred due to its durable material. A uniform in No-Gi jiu-jitsu generally consists of a rash guard and shorts. Although not entirely traditional, some argue that no-gi Bjj is more realistic as it doesn’t rely on gripping the collar and sleeve of the gi for control. We have previously talked about the advantages of Gi training but below I have outlined the key differences between gi and no-gi Bjj.

Gi vs No Gi

This may seem obvious but it is a huge factor between the two. The gi is made of heavy material which can add to fatigue on the mats. The friction created between two uniforms makes it very difficult to slip out of positions without proper technique. In no-gi, athletic beginners could make their way out of tricky positions through strength and endurance. When I first started training no-gi, I couldn’t believe the difference in my fatigue. When you are used to grinding it out in the gi and that factor is taken away, your movement is freer and you feel several kilos lighter. When I was sparring for 2-3 rounds in a row before, I was able to spar almost every round in no-gi. Apart from the visual difference, physical change is enormous.

As mentioned above, controlling your opponent in the gi relies very much on collar and sleeve control. These controls serve to break down your opponent’s posture so that you can advance your position. Initially, these grips can be hard to hold but after time, your fingers will be conditioned to hold on for much longer. Whilst this gives you a huge amount to control, it is difficult to always apply that to a self-defense scenario. No-gi focusses on over hooks, under hooks, and controlling the head and wrists. Because of the slippery nature of no-gi, these controls can be hard to maintain so your technique is forced to improve. Over hooks and under hooks can be used in the gi but for the most part, you need a good mix of the two in order to advance your game. One factor to decide on Gi vs No Gi

The use of the collar and lapel for submissions is the most obvious difference between the two disciplines. The bow and arrow choke, bread knife, and cross choke are some of the most fundamental submissions in gi bjj. These require the use of the collar in order to choke your opponent. In no-gi, given the lack of restrictions, certain chokes are easier to come by. One of my personal favorites is a one handed rear-naked choke. Here, you trap one of your opponent’s arms with your leg and control the other with your non-choking hand. Additionally, leg-locks are far more popular in no-gi as too are guillotine chokes. Fundamentally, chokes that require more friction and restriction will be successful in the gi and the converse is true for no-gi. 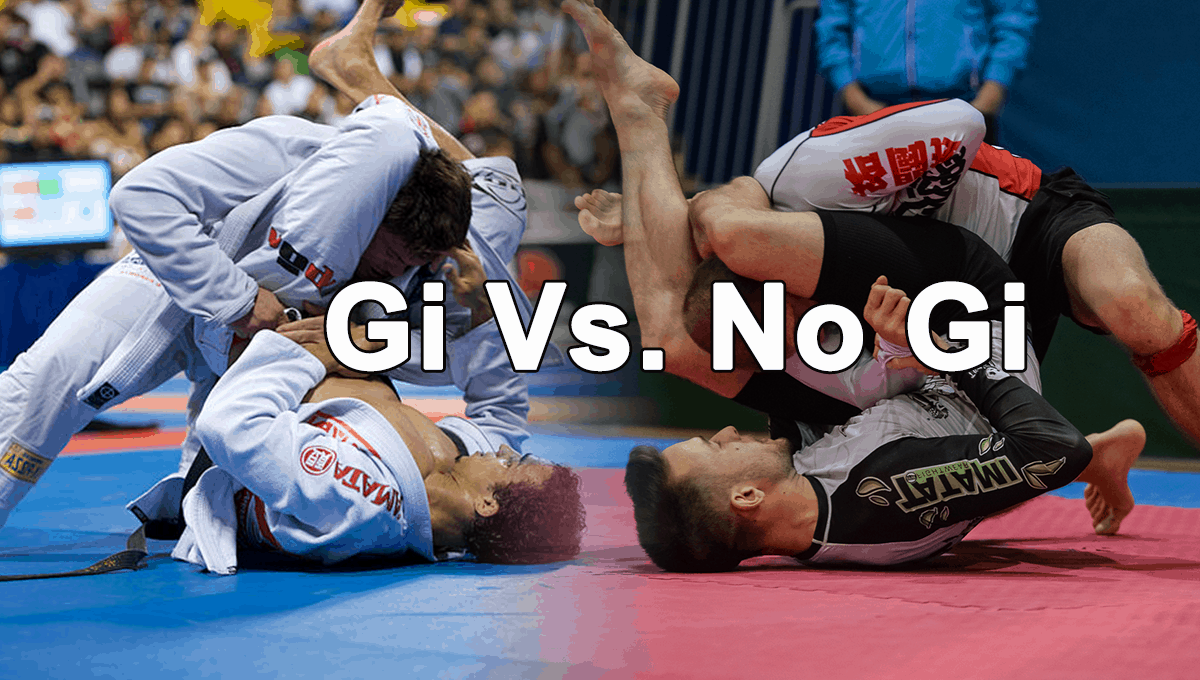 Article Name
Jiu Jitsu Gi vs No Gi Explained
Description
The key differences between Gi and No Gi Jiu Jitsu include the (lack of) uniform, the available controls over your opponent and the possible submissions in each discipline
Author
OutlastBJJ
Publisher Name
OutlastBJJ
share this
Tagged as gi Gi vs No Gi no gi uniforms
related posts

What Gi Color Should I Get?

What to Bring to BJJ Class