you are here
Home > Training > Defending the Worm Guard

A few weeks ago, we published an article about why you should learn Defending Worm Guard. The guard was created and brought to prominence by Keenan Cornelius in recent years. There were some key points from that article. Firstly, worm is excellent for controlling your opponent. Secondly, the guard is a powerful way of breaking your opponent’s posture. Thirdly, the guard is a great tool for advancing position, especially to the back. Our final point was that, given how recent the technique is, many people will be unsure of what to do when caught in the guard. Looking through YouTube and forums across the internet, the worm guard has certainly become a popular guard amongst many students from white to black belt. Below, we will be looking at some important points for avoiding the guard and also some effective tips on passing the worm if you are caught in it.

Tips on Defending the Worm Guard

The most straightforward defense to worm guard is avoiding it in the first place. By the time you realize you are in worm, it could be too late. Breaking or avoiding the lapel grip is your most important move in defending the worm guard. You should be aware of when your lapel is free from your belt or when your opponent tries to free it themselves. Both of these scenarios signal that a worm is incoming. If your opponent catches your lapel, your next point of defense will be to extend their attacking foot in any direction. A good student will catch their foot in the material of your Gi and will counter these extensions by forcing their foot into that material. If you can get it far enough in one direction, you can start to move around to side control, north/south or mount and work to break their lapel grip from there. Their foot will be their focal point for advancing their position so the more you attempt to disrupt that, the more success you will have.

The back step is commonly used in half guard but can be equally as effective in worm guard. This pass will occur from ‘Ring Worm’ when your opponent has your lapel wrapped around your close side leg and their own leg. From here, you should keep your ‘far’ leg (the free leg) away from your opponent. Next you should be pressuring their chest down towards the mat. This will restrict their movement and negate their hips from moving too. From here you should wait for your opening and step your ‘far’ leg around the back of your opponent (to the other side of your close leg). Now you will almost be in side control and can pressure your opponent into releasing their grip. It’s important to note that freeing the grip will not be straightforward but from the side you will be in a much better position to get out of the worm. This technique was used in an IBJJF tournament by Pedro Ramalho.

Rodólfo Vieira has another pass which stresses the importance of not letting your close leg get trapped. One of the most important aspects for the attacker is to trap your leg between their own leg and your lapel in order to restrict your movement. You start by opening your leg towards your lapel. This will essentially torque your opponent’s leg away from yours. Next you grab their collar and apply pressure towards the mat. This is essentially the same concept as the back step above. With their movement restricted, you then seek to stuff their open side leg in between your own two legs as you would in a mission control position. From here, your opponent’s movement will be far more restricted. Keep torquing your knee towards your lapel, keep applying pressure towards the mart and begin to work around their body to either the side or the mount if possible. The most important point here is not getting your leg caught and on the mat as your mobility will be vastly reduced.

The squid guard is another variation of the worm guard which is harder to achieve for the attacker but even more difficult to get out of. André Galvão teaches a pressure pass in order to get around this variety of worm. This pass works similarly to extending the foot as we spoke about earlier. Firstly, you extend their leg between your own leg and your lapel. It is important that you don’t allow their leg to come around into a De La Riva hook. From here, they will only have one leg to maneuver so begin to work yourself away from that leg and circle around their body. You want to end up in an almost North South Position. Your opponent will still have the grip so you must pressure down on their shoulders and arm extending their arm almost to an arm lock. As soon as they lose their grip work your way back around their body and begin to work your way to side control. 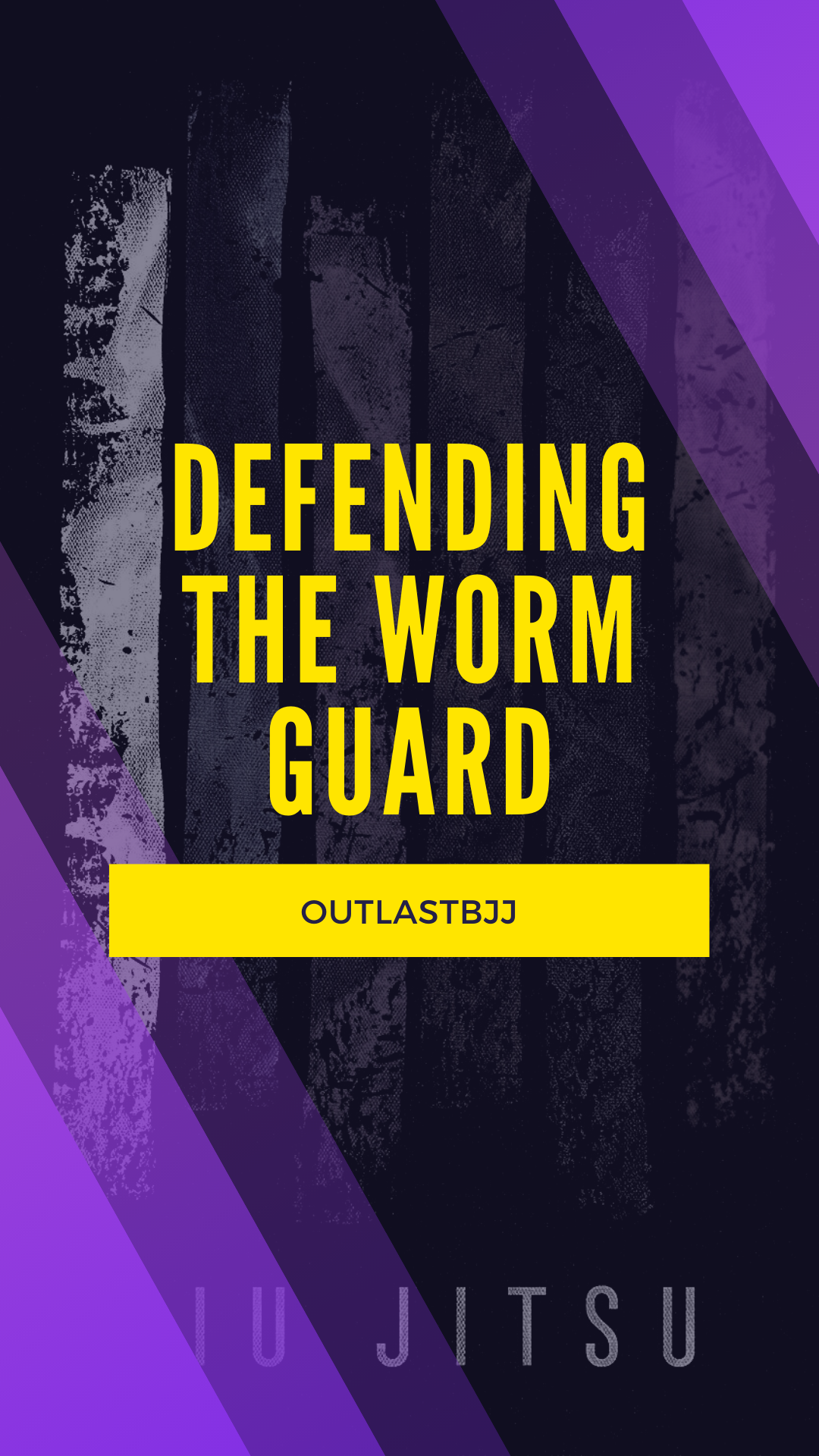 Article Name
Defending the Worm Guard
Description
Keenan Cornelius’ worm guard has stumped many BJJ students in recent years. Aside from avoiding it early, some of the best defenses include the back step pass, pressure passing and flexing your legs
Author
OutlastBJJ
Publisher Name
OutlastBJJ
share this
Tagged as guard pass worm guard
related posts

The 4 Most Important Lessons From BJJ

The Unspoken Rules of Jiu Jitsu